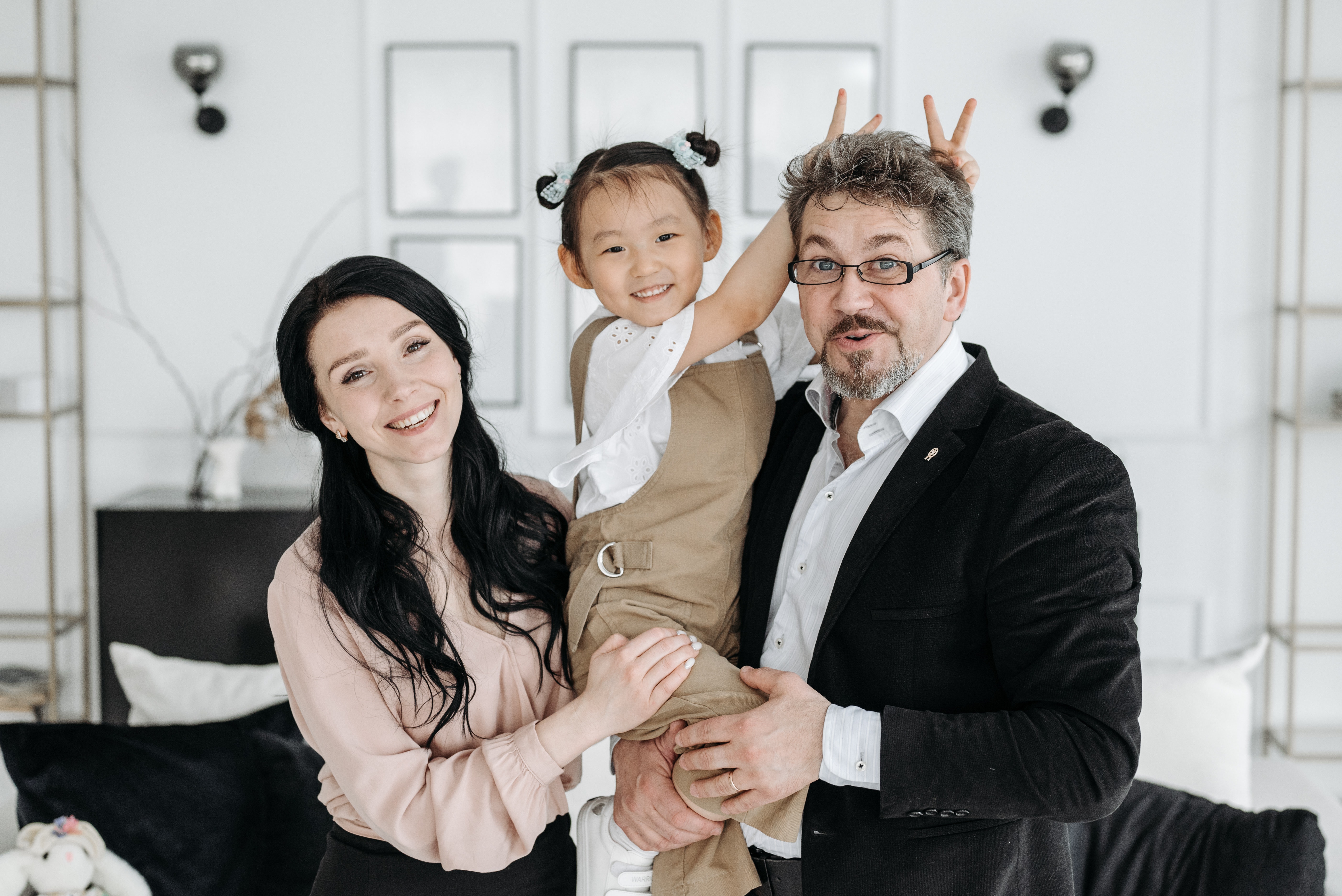 bias (believing that somehow, it's not as good as raising your bio

child) towards rearing a child not of your own making - this one's for you.

At the start of our family making journey, adoption simply wasn't a

consideration. We were going to have our "own" child, when I was good

and ready. Said child would have the looks and attributes that combined

the best of my hubby and I, and our genes would move into the future

assuring a certain feeling of immortality.

Adoption was for other people, and they were certainly more selfless and

philanthropic that I was, so I believed.

I'd like to be completely honest here regarding my biased perceptions

towards individuals and couples that pursued adoption, as I imagine

through your own thoughts and feelings. So, here we go -

1) Simply put, I thought that creating a family through adoption was less

desirable than through the all-powerful blood-and-genes connection. It

seemed 2nd best to me. A compromise; leftovers for the desperate.

Certainly one couldn't attain the closeness, the bond, the attachment felt by

the experience of creating and sustaining a life through one's own body.

2) Parenting by way of adoption seemed sub-par; the experience being

more like babysitters versus feeling the empowered sense of being

don't want to raise someone else's child."  And who hasn't heard the

question, "Where are the real parents?" This further exacerbates the

(misinformed and hurtful) notion that adoptive parents are the opposite of

real - they're the fake parents, the stand-ins.

the child. Better just to say goodbye early on and then let them navigate

biological connections, if they desire, later in life. The thought of an open

adoption where we kept in touch with the birthparents, simply terrified and

4) Adoption is too risky. I'd envision getting the baby home, attaching, and

then poof - the biological family would swoop in, claim genetic rights, and

we'd lose - the child and then our minds.

5) Adopting a child won't fill the void, won't replace the hole that represents

what my hubby and I couldn't produce. The legacy of loss will override any

life ends with me.

Now that I've got substantial professional and personal experience with

Assumptions #1 & 2: Adoption is a less-than experience than creating your

Simply put, it's bullshit. Misinformed crap. I once read the anonymous

joyous, challenging work, and adoptive parenting is a bit more work. A

labor of love. You'll be surrounded, at times, by intrusive, uninformed

opinions regarding the way you created a family. You'll develop a thicker

skin and learn how to best handle these experiences over time. You'll likely

have additional challenges that biological parents won't, but you'll also be

privy to the associated growth opportunities that these experiences invite.

babysitter, not the stand-in.  Biological parents experience entitlement from

the onset - the fact of having a right to something. Empowerment is

superior, however, because it's the authority or power GIVEN and EARNED

to parent. When my daughter was nine months old, I remember thinking

her in utero. This seemed significant to me at the time.  I needed affirmation

that I was doing the work, the hard stuff of parenting, to feel

empowered.  Today, I'm parenting a 3-year-old, and I'm the mom. I just

celebrated Mother's Day yesterday, dropped my daughter off at school this

morning, and will take her to soccer practice later today. That's the stuff of

parenting. If you'd like to cover the math on this one, I've been parenting

gestational  parenting (in utero). When you consider who the "real" parent

is now, the question appears absurd. I am forever grateful to the

birthparents for the masterpiece they created, the lovely young lady that I

get to call my daughter. I've put in the work, and I've earned the title of

"mom." And did I mention I'm crazy in love with her?

Assumption #3: Adoption is confusing for the child.

Generally speaking, do you tend to be confused when you don't have

information - or - when you do? For most people, information provides

clarity. When you are open and loving regarding the way your child came to

your family, everyone benefits. Secrets and withholding information breed

shame over time.  While the information surrounding an adoption may be

private to your family and close friends, it's not secretive.

As my daughter grows up in an open adoption, she will become familiar

with her birthparents. We lay a foundation for her, similar to planting a seed

and watering it, so that someday, if she wants to further develop these

relationships, she won't be starting from scratch. Is it sometimes

uncomfortable to navigate the relationship between parents and

birthparents? Yes, absolutely.  But it's necessary. Our daughter's well-

Assumption #4:  Adoption is too risky.

Isn't taking risks the spice of life, though? Seriously, I have no interest in

people who try to avoid risks. There are laws in place for adoption, and the

best thing you can do is get informed about the laws in your state.

Everyone has a horror adoption story to share, but really, they're rare.

Don't let your fear determine your actions. Feel it, and move forward

This assumption goes hand in hand with Assumptions 1 & 2, espousing

that's biologically based. Remember how I called bullshit on that earlier.

Let's go deeper with this one...

For a large majority of people, adoption is the end of a long, often painful

journey towards parenthood, punctuated by a variety of losses along the

way. I call this the "legacy of loss."

To get right to the point, suffering is a part of life. To imply that loss or

really healing the wounds of what could have been biologically, is to speak

the language of rigidity and inflexibility. It's my way or the highway, as the

saying goes. For some people, no amount of light can fill their darkness. If

you choose to adopt this philosophy, or if it's been passed down to you, it

will do more than just affect your parenting journey, it will affect the most

significant aspects of your life.

mother that make the experience of parenthood extremely meaningful and

fulfilling. It is the opposite of void. Are the losses magically erased? No,

and I wouldn't want them to be.  I want all of life, not just the pretty,

presentable parts. The opposite of void, the antonyms are - - filled, full,

You must allow the possibility for the unknown. You must invite it to

transform you. You will be filled, even if you also feel the legacy of loss.

Assumption #6: I can't take any more loss, any more disappointments.

To paraphrase the famous psychologist Albert Ellis, 'You can stand

anything but death.' It's harsh, and yet it challenges you to call upon the

reserves of your resiliency. If you've experienced a legacy of loss already,

adoption that doesn't go through. My hubby and I painfully joked, before

taking our daughter home from the hospital, that we'd go on a homicidal

rampage if things fell through. I felt so vulnerable, beaten down, and

powerless. I understand your pain, but you can and will survive this, and be

better for it. Maybe you can't see it yet, but I can. Just hold on. As Ellis

said, "The art of love is largely the art of persistence,"

Assumption #7: Biological children pass on my genes, giving me a sense

of future contribution, of significance, of a stake in immortality.

Your life as you know it ends with you, no matter your beliefs. We're all

going to die. It's not a hypothetical. And there's no guarantee a biological

child will perpetuate your genes beyond herself. Let's try something - can

you identify the names of your great, great grandparents on both sides?

That's only three generations from you, and yet most people cannot recall

What is passed on, however a family is created, are the important ideas, life

philosophies, cultural teachings, and values.  That, my friends, is where the

Adoption isn't second best. But don't trust me, try it for yourself. It's

certainly not the path of least resistance, but it bears significant fruit.  Flip

the script on what you thought would happen, making space for what could